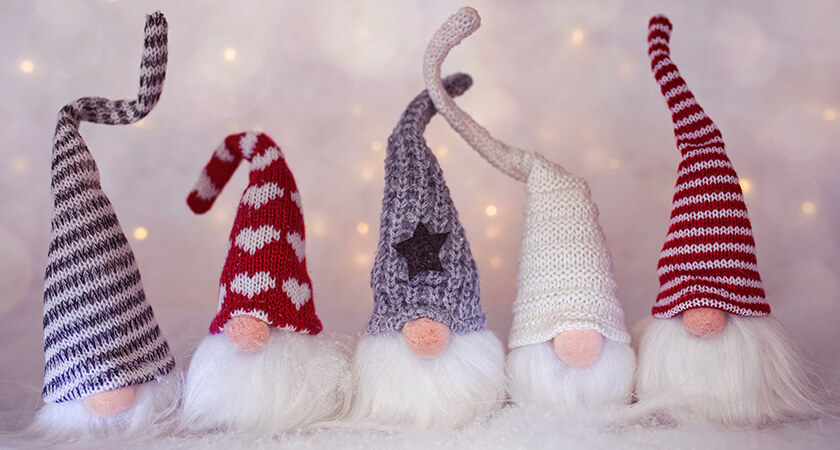 You may have seen these Nordic style Father Christmas decorations pop up here and there in people’s homes and in window displays at shops and the like. They are short, they have their hat pulled right down, their little round nose sticking out, and they seem to sit equidistant between Santa Claus and a garden gnome in their style. They have become, in the last five years or so, one of the country’s favourite Christmas decorations. But what exactly are they and where did they come from?

A Little History About Gonks

Gonks did not originate in the UK, and in fact they did not begin life as a Christmas decoration. The reason why they look rather like gnomes is because, in a sense, they are! Gonks stem from Nordic and Scandinavian mythology. They are meant to be something like a mix of a gnome and a hobgoblin.

In the original folklore, these curious little creatures were said to take a liking to barns or houses in the colder seasons. If families treated them well, they were said to protect the family and give them good luck. If the family did not respect the mighty little gonk, then they were said to play tricks on the family! Behind this story is a message on the importance of being welcoming and hospitable. Knowing what we do about how brilliant the Scandinavians are at making a home warm, welcoming and peaceful, it should be of no surprise that this philosophy finds its way into their ancient folklore.

First written reference to gonks comes in the 1600s. However, some have even pointed to evidence that there may be records of them being referenced as early as the 13th century. Over the years, the idea of welcoming the gonk into the family home and treating it well was woven into winter tradition. It became common, for example, for families to leave out a bowl of porridge for the hungry little gonk over the winter solstice. As Christmas became a more prominent celebration in the Nordic and Scandinavian countries, the traditions melded. This is where we get the gonks today which are dressed in Christmassy costumes.

How to Use Your Christmas Gonk

You can use Christmas gonks as standing ornaments; such as stand them up as window decorations to make the home look extra cosy and welcoming to the outside. This works very well in commercial settings too. Where the little Christmas creatures will be sure to catch the eye of many walking by and draw them into your shop or café. You might also like to place a long legged gonk on bookshelves. So that they look pleasantly perched on the edge with their legs dangling. This works well on the mantelpiece too, where the gonks can decorate this space and bring a sense of fun, warmth and a little bit of mischief to the feel of the room.

If you have some larger statue style gonks for the outdoors, you can also set a few up in the garden in the style of garden gnomes. This will also look lovely in the courtyard or front entrance of a hotel or a restaurant. Ideal for helping to set the festive mood along with fairy lights on a winter’s night. The smaller softer gonks however must have a home indoors. We love standing ours up somewhere near the front door as it opens. This way, the gonk welcomes your friends and family into the home. Just in the same way that you are meant to welcome a gonk into your home in the original folklore.

Cosy in the Christmas Tree

With the little gonk designs, you can also work them into your tree decorations. Using ribbon or string, you can fasten your gonks to the tree. Depending on the tree, they might even be able to nestle in there without any extra materials to secure them. This works wonders for a tree at home or in a commercial space. Those little bearded creatures will look especially cosy in their position in the branches. This in turn imbues the room with a similar sense of cosiness.

A Touch of Magic & Folklore

A Christmas style gonk is always able to help you set a scene. This might be in the cosy bedroom, or among the presents in the living room. Setting up some mini standing and sitting gonks in any area of your home or your shop will help the area to look like a magical space. The gonks bring a folkloric wonder to a focal point of the room. At once welcoming people in and allowing them to revel in the magic of the season.

There are lots of different styles and colours of gonks out there. Consider how you would like you use your gonk. Such as standing or sitting, legs hanging off a shelf or as a Christmas tree decoration, as well as your chosen theme or colour. They work brilliantly in a Scandi or Nordic theme (of course), but also fantastic for many other themes that need a fun or novelty touch.